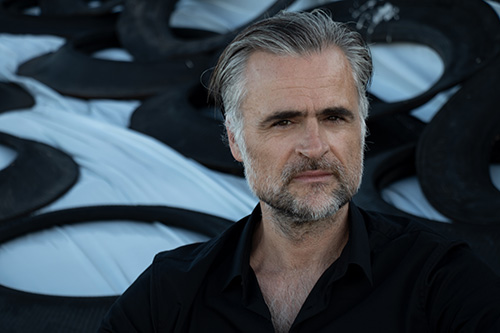 Sascha Janko Dragićević, born in Bonn in 1969, works as a composer together with important performers and ensembles of contemporary music. His works are performed internationally and can be heard at festivals and series such as Wien Modern, IRCAM Manifeste Paris, Beethovenfest Bonn. Most recently, Collegium Novum Zürich dedicated a portrait to his music, together with the conductors Peter Rundel and Jonathan Stockhammer. His work "Ausschlag" for large ensemble and live electronics was released on CD in 2018 at the label Neos for the 25th anniversary of the ensemble.

He has worked for many years with Johannes Schwarz, the bassoonist of Ensemble Modern. This is documented on the CD "più" published by the EM label. On this is also the work "Autogamie" for bassoon and electronics, which Dragićević brought a lot of international attention.

For the ensemble Soundspaces, founded by Johannes Schwarz together with the saxophonist Sascha Armbruster and the sound director Sebastian Schottke, the extensive work "Symbiosen" was created, which will be released in 2020 on CD by the label Orlando Records.

Dragićević sets significant accents in the development of diverse possibilities for combining instrumental and electroacoustic sounds. Here he is looking for extensions to the sound spectrum which - pointing beyond what is “humanly possible” - open up new sound spaces.

His music has been awarded numerous prizes and grants. In 2020 he received the work grant for serious music and sound art from the Berlin Senate Department for Culture and Europe, as well as the work grant at the Künstlerhaus Lukas, Ahrenshoop, funded by the state of Mecklenburg-Western Pomerania. In 2014/15 he was a scholarship holder at the Cité Internationale des Arts Paris, and in 2012 Artist in Residence at the Institute for Computer Music and Sound Technology (ICST) Zurich. In 2011 he received a composition grant from the Berlin Senate Administration. In 2010 he was artist in residence at the Institute for Music and Acoustics at the ZKM Karlsruhe. In 2008 he received his first work grant at the Künstlerhaus Lukas, as well as a work grant at the studio for electroacoustic music at the Franz Liszt School of Music Weimar. This resulted from the 2007 Franz Liszt Prize at the international composers workshop there. In 2004 he was awarded the Bernd-Alois- Zimmermann-Scholarship of the city of Cologne, in 2002 the advancement award of the Verein der Opernfreunde Bonn.

Sascha Janko Dragićević performs his own works as a pianist and performer. He works in the field of improvised music and jazz, as well as a sound director and live electronics engineer. Numerous teaching activities at colleges, universities, music schools, as well as in cooperation with foundations and in the context of education projects, workshops and masterclasses testify to his commitment as a teacher.

His works have been published by Edition Gravis since 2015.